Many international visitors in our stand at EuroTier

Just back from the world’s largest agricultural fair EuroTier in Hannover. The attention we received was beyond expectations. It was confirmed by many visitors that our autonomous precision weighing is world-leading. Many of the leading international companies in animal production showed a great interest both for our commercial systems and future innovations. We had several exciting meetings as start for Hencol entering international markets.

Extract (translation) of the Swedish Agricultural magazine Jordbruksaktuellt report from the Hencol booth at the EuroTier agriculture fair:

“At Eurotier, the innovation company Hencol presented their concept Connected LiveStock Manager. The system takes its starting point in the fully automatic weighing station that generates precision data for optimized production and better economy. When Jordbruksaktuellt visited Hencol at the end of the fair the atmosphere was almost euphoric in the booth. That so many companies and stakeholders from different parts of the world showed great interest and also proposed concrete business projects directly, was very positively perceived.” 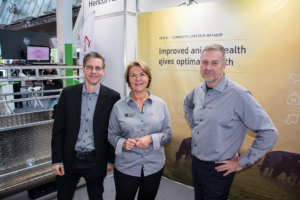 The proud owners of Hencol